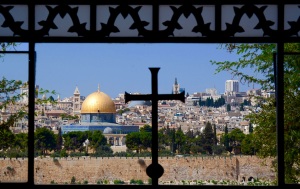 Window of Dominus Flevit (“God wept”) Chapel atop the Mount of Olives, facing westward toward the Temple Mount and the Dome of the Rock.

I crossed a couple of things off my “bucket list” this week. For one, I walked the third-mile long, 2,800-year-old Hezekiah’s Tunnel. In the 8th Century B.C. Judahite King Hezekiah prepared for a starvation siege by the Assyrian King Sennacherib by diverting Jerusalem’s main water source, the Gihon Spring, from its origin in the Kidron Valley, deep beneath the ancient city walls, to the area that would later be known as the Pool of Siloam. (Read about this in 2 Chron. 32.30.)

It was an impressive feat of engineering in its day, and it remains so even in our own. The spring still gushes, the water still courses energetically, and the recently-rediscovered Siloam Pool is receiving water once again. It was there that Jesus healed the “man born blind” (John 9.7). Several of us felt as if we were blind as we trudged through the totally-dark, narrow, low-ceilinged tunnel with ice-cold water, knee-deep in some places, nudging us forward. The objective was to keep your flashlight and camera dry, and stay in voice contact with the persons ahead and behind you. All the while you were reminded of the factuality of biblical history.

Then today I joined a “pilgrim walk” from the summit of the Mount of Olives, sharply downhill to the Garden of Gethsemane. Along the way are notable pilgrim churches, including the Pater Noster (“Our Father”), the Russian Orthodox Church of Mary Magdalene, and the Dominus Flevit (“The Lord Wept”). At Dominus Flevit I took a photograph through its famous window, which faces west toward the Temple Mount. The picture, taken by thousands of others, focuses the Cross of Christ upon the Muslim Dome of the Rock. And it reminds us that Christ–and Christ alone–remains the hope of the world. Shabbat Shalom (Sabbath peace) to all of our friends in Greensboro! Steve