In 1993 I spent five months working in refugee camps in Somalia where at that time people were starving to death all around me.  I saw the despair of parents who could not feed their children and the joy and hope when we were able to nurture one little one back to health.  Somalia is a Muslim land and we were not allowed to preach, but offering food was a witness as we demonstrated God’s love for the “least of these.”  Our world is a hungry place.  Early in November the UN estimated that there were 51 million refugees in our world.  One million of those are in Lebanon and maybe as many as another million in Turkey as a result of the war in Syria.  War, Ebola, destruction, terrorism, natural disasters all create refugees, displaced people, homeless people and seemingly endless hunger.  In all this suffering there is a hunger for hope, for truth and love.  A hunger for God.  CBF’s theme for this year’s Global Mission offering is END HUNGER. 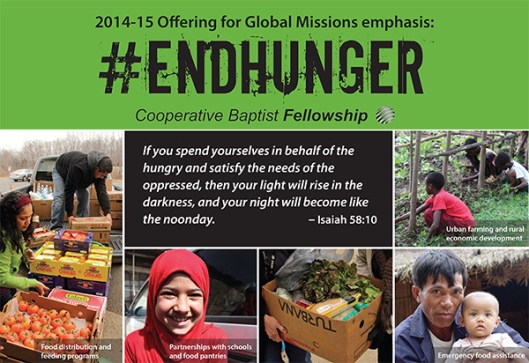 CBF field personnel are the presence of God to some of the neediest people on our globe.

These are just a few of the more than 130 field personnel who are eagerly waiting to see how churches like ours will give to Global Missions offering this year.  They are waiting to see how many of their projects and ministries can be funded next year.

Please pray about how much you can give to be God’s presence in these hungry places.  Pray for these missionaries who are on the front lines providing hope in dark, and often dangerous places, in our world.  Some are called to go, the rest of us are called to pray and give that God’s love can be show to the ends of the earth.

Shared by Martha Robison Spangler on November 30 during worship to introduce the CBF Global Missions Offering for December.

December’s Special Offering is for CBF Global Missions:  This offering supports CBF field personnel.  You can give to this offering in several ways: