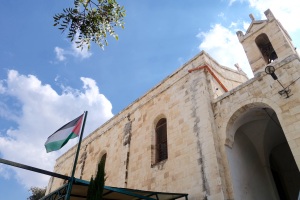 The Northern West Bank City of Nablus (biblical Shechem), with 140 thousand residents, “rocks.” A person wouldn’t expect an Arab backwater municipality, sandwiched in a deep valley between Mt. Ebal to the north and Mt. Gerazim to the south, to be a bustling place. But Nablus is.

Apart from relatively casual military checkpoints in areas where roads cross over into Israel proper, the despised Israeli “Occupation” is nowhere to be seen. The resulting liberty has enabled Palestinians in the north to prosper, from all outward appearances. Drive along either of Nablus’s two major downtown thoroughfares, and you see banks and new car dealerships and fancy fruit-and-vegetable markets and upscale boutiques.

The Old City of Nablus (every town in the Middle East has its “Old City”) features a traditional Arab “souk” (a long, narrow, enclosed street market) that eclipses anything you see even in the Old Cities of Jerusalem and Amman, Jordan. What do you want to buy? Clothes, shoes, toys, furniture, electronics, appliances, Arab sweets, meats and seafood (including steaks hacked right off the shark!). If you don’t see it in the souk, maybe you don’t need it.

It isn’t that Nablus is a thoroughly-modern Millie. ALL of the women wear traditional attire in public. Faces may be beautifully made-up, and footwear may be stylish. But heads are covered and dresses of heavy fabric are ankle-length. That’s because the city, if not thoroughly-modern, remains thoroughly-Muslim.

There is a Christian community there: 800 persons shared among four congregations (Greek Catholic, Roman Catholic, Greek Orthodox and Anglican). All together, they are about one-half of one percent of the population. “So how do you share your faith with such an overwhelming majority?” I was surprised hear one of our priests ask. Only by means of educational and social work, was the response. “We provide a disproportionate amount of benevolent ministry,” said the Anglican pastor who was hosting us.

Another priest, who leads a small Melkite (Greek Catholic) congregation in an outlying community, responded quietly to the same question. “We can’t evangelize; it would be dangerous.” I thought I knew what he meant–not necessarily dangerous for him or his congregation, but certainly dangerous for anyone who might convert.

The missionary work of the Apostle Paul was, at times, dangerous to him, personally. Jews and pagans who felt threatened for religious or political or economic reasons might assault him or have him thrown into jail. In the early days of the Christian church, it might also be deadly for converts, as it was during the Roman persecutions.

But there came an era when the risks of evangelization grew minimal, and people could preach and respond to the claims of Christ without fear. And so it remains for us who are privileged to live and serve our Lord in the West.

Not everyone in the world is so fortunate. And for them–and for the non-Christian majorities in whose shadow they dwell, and among whom they live and serve–we should pray without ceasing.