Last night – Christmas Eve – we gathered beneath the star. As I shared a homily, I held my 5 month old baby, Elizabeth Bea, because at first, that’s what the story is about: holding a baby.

My friend Ashley-Anne recalled this a few years back when she was standing in a grocery store check-out line and the customer in front of her asked the clerk if she had any Christmas stamps.

“Do you have Christmas stamps?” the customer asked.

The clerk replied, “No. We just have Liberty Bell and some lady holding a baby.”

As the clerk scanned Ashley-Anne’s items she kept going back to “some lady holding a baby” and said she sold those stamps for weeks and never knew it was Mary and Jesus.

Such honesty. At base that’s what the story is about. It’s just that ordinary. It’s a story about teenagers in a barn, having journey to Bethlehem as merely two among a mass of people coming to be taxed. An innkeeper turns them away. Some first-century farmworkers come by having heard about the birth. The teenage girl gives birth to a healthy baby and holds him close as her fiancé names him “Jesus.” Word became Flesh and history hinged, but it was just as ordinary as a woman holding her infant son.

Mary with Jesus pressed against her chest. Joseph, in days and weeks to come, swaying in the night trying to lull him to sleep. And in today’s text, Simeon reaching out to hold the son of God.

“Simeon took the child Jesus in his arms and praised God…” – Luke 2:38

When we encounter Simeon it’s not Christmas Day, it’s forty days later. The shepherds, the angels and the heavenly hosts are all gone now. The music has stilled. And Joseph and Mary are just starting to sleep through the night. As devout Jews, they have already taken their infant for circumcision and naming and now, after the appropriate time has passed, they’ve come to the temple in Jerusalem for the baby to be consecrated to God.

That’s when Simeon comes into the temple, guided by the Spirit.

Startled at first, perhaps, even a bit frightened by the old man’s ecstatic face, Mary and Joseph can sense the Lord’s Spirit upon him.

They hear Simeon’s prophecy and it reminds them of the whirlwind events of the previous weeks and months when angels and shepherds had all come into their lives to foretell the greatness of their Son.

So they offer their son to this faithful servant. And Luke says that Simeon took him in his arms.

And the text is very clear about the posture here. Literally it says his elbows are bent. Arms relaxed, hands open, palms upward.

That’s how you receive a baby. But it’s more than that.

From ancient times, this posture that Luke describes in Simeon is a posture that signifies gratitude. It indicates a willingness to receive the gifts of God. Elbows bent, not extended as though to grab. Palms open, not trying to clutch too tightly or grasp too rigidly.

Simeon was an open-palms/elbows bent kind of person.

His life was open to the Spirit that is mentioned guiding him, moving him, revealing to him.

His eyes were open to the work of God around him in the world as he looked for the evidence of God’s salvation.

His heart was open to those who came his way.

So it makes sense that he would approach the infant Jesus this way… elbows bent, palms open.

Among those who practice contemplative prayer, this is known as a posture to receive…

In fact, throughout Christian history Simeon has been known by another title: “The God Receiver.” 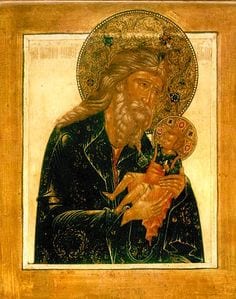 Most of our translations of Luke describe Simeon taking the baby. But that’s too strong. He doesn’t take the baby at all. He receives.

There’s a world of difference between taking and receiving… and that difference might just form the heart of the gospel itself.

The scholar Ray Brown has suggested that the infancy narratives in Matthew and Luke – the stories of Jesus’ birth and all that proceeds his adult ministry – are the gospels in miniature…that we are drawn into them not because of their romance and imagery, but because we recognize what Brown calls “an essential core of the gospel message.”

If this is so, then part of what we recognize in Simeon is the choice before any of us as we approach this one born into our midst in these days of Christmas… will we be people who take or will we receive?

At our previous church in New York we had a nativity scene or creche is among our Advent decorations. Our tradition – which is shared by many other churches – is that the manger stays empty until Christmas Eve. So for some of our children, a core question each Advent is, “Where’s Jesus?”

Now, laying aside their deep theological sensibility for a moment…the answer is, this tiny pocket-sized Jesus is kept in a drawer somewhere until the grand Christmas Eve appearance… then put back into storage until next year.

The one we can take anywhere… set any place… display at certain times, and shelve at others…

Yet the baby grows up. The child grew and became strong, v. 40 is clear. He starts stretching his way into this world, enlarging the space around him…pushing at the boundaries or ignoring them altogether.

And many of us like the Christmas story the best, because that’s the Jesus we can always hold. The one we can take and form in our own image.

That’s what so many of us are looking for when we come to Jesus… as they were in Simeon’s day.

Simeon has been waiting his entire life… as we see with the Temple setting of the scene… the locale telling us not only where Simeon is standing physically, but also that he is theologically right in the middle of Jewish messianic expectations… expectations that so often began, as ours do, with extended arms, grasping hands and set plans…

Consider his mother in this scene. She has heard from the angels, and sensed her son’s greatness… she has said yes to her part within it all… but imagine her chill when Simeon turns his blessing from God to then address Mary. He seems to warn Mary. “Steal yourself. A sword will pierce your soul, Mary. Because of this child you hold. And you can never prepare for it, not fully.”

A reminder that Jesus would suffer, but that Mary would suffer because she loved Jesus, too.

This proud mother holding her newborn son, is learning that he will grow even beyond what she can hold. In fact, in the very next scene in the gospel of Luke she loses him on the road – a sign that he is growing stronger and older and out beyond her reach and her expectations.

It’s what Jesus would to others throughout his life, constantly encountering arms stretching out to grasp him, to direct him, to mold him into the one they had been waiting for, even unto the end.

Notice, one of the last things he says, to Mary Magdalene outside his tomb, as he stands there resurrected in the fullness of his glory as the risen one who could not be held by the tomb, he has to say to her “Don’t hold on to me…”

And I imagine her grasping at him, reaching out to grab, or to take.

And he says to her again “Relax your arms. Open your hands.”

That’s what this baby makes known to Simeon, and to all of us who would receive him this Christmas: another way. A way of salvation and freedom that helps us to see what we have not seen before. And it was true from the very beginning, even for those first to hear the proclamation of the Gospel, as the angels tell them “Fear not…” and they bring themselves to loosen up and run with abandon to see this thing that they had heard about.

See, in order to receive, you have to loosen your grip on some of what you’re carrying already.

We can’t hold open our arms if fear is blanketing our shoulders. We are slowed down when our hands are clutching and grasping every measure of security. We can’t animate the story with our own lives as we are intended if we’re holding on to our set expectations. We can’t take on its motions and movements if we’re too fixed and unwilling to follow in the way of vulnerability and love.

That’s what the baby in the manger grows to tell us about and to make known to us: an elbows-bent, palms-open way of being.

In fact, much later in the story when he sends out his disciples to follow in his way, he tells them to free their hands. “Don’t take a staff. Set down the money in your purse. Don’t take a cloak or a blanket. Leave your shoes. Go out vulnerable, without the usual precautions.”

With your hands free, you can learn to welcome the stranger in your midst.

With no staff to protect yourself or ward off what approaches, you’re less likely to live with suspicion of what’s up ahead.

Without your sandals, you’ll remember what it is to walk free and uninhibited through this earth.

Leave the bag. Without it you’ll learn that while you can carry a lot of provisions and precautions, you can never carry enough.

And take no copper in your purse. Leave it. Without it jingling around you’re less likely to believe you’re self-made, and more likely to look around and remember that “I am you and you are me” in this web of mutuality.

See, with our bodies free, we can run with abandon. Unencumbered we can sense more readily the leading of the Spirit that leads us all to the place that we can receive this one who comes near to us.

Of course, not long after Simeon holds him in Luke 2, the world that receives Jesus will begin to change its posture.

We will try to get our arms around him, so that he fits our hopes for him.

We’ll try to grasp him, so he’ll remain still instead of compelling us forward to places we wouldn’t choose to go.

We’ll try to clutch him near to us, so he loves what we love and hates what we hate.

We’ll want him to fit all our categories and expectations that we keep within arms length.

And when he doesn’t, we’ll corporately grab hold of him and take him to a hill outside Jerusalem.

It happens so quickly. So easily. Chances are, it’s happening to us even now. The one born into our midst is starting to grow. And as we feel the tension that brings and the demands it makes, it’s so much easier to try to take hold of him once again, forgetting that the way we are meant to receive Christ in our world is the posture with which we receive a baby. It’s only with our elbows bent and our palms open – it’s only by receiving – that we’ll be able to say with Simeon: “My eyes have seen your salvation.”

Let it be so this Christmas for us – God-receivers, all.